Jacquelyn talks about becoming an audiophile, her upbringing in Canada and why music makes her happy.

Jacquelyn Brioux is an experience designer and storyteller who specializes in design for human flourishing. She had a previous career in musicâ€”an interesting tid bit and a huge part of what makes her happy.

From music to design, Canada to the US, Jacquelyn has a great story. She begins by sharing that the root of what makes her happy is helping people and doing meaningful things. This begins with music.

The deep connection she has with music is complex. Often, Jacquelyn must ask herself what part of music makes her happy. Is it the calm? Is it the self indulgence within her own emotional state? Is it the story? To explain, she shares with us an emotional example of music to which she feels connected, further honing in on the fact that relatability to the artist and their authenticity pulls her in. Most importantly, she suspects it is the connection to people and sense of community music brings that holds the most meaning and makes her happy.

She mentions there are two types of music listeners: those who focus on lyrics and those who focus on sound. She is absolutely the latter. â€œIâ€™m gonna offend some people, but I canâ€™t stand Bob Dylan.â€ This is because Jacquelyn is all about the sound and canâ€™t get past that enough to solely appreciate lyrical content.

The happy moments of her overall-difficult childhood centered around music. Her parents are musicians and her mother would sing to her at night. Even when something negative happened, she chose music as her escape and it served to bring her back to a positive.

Jacquelynâ€™s life changed drastically when she found out her friend had died in a tragic accident. Both had experienced troubled childhoods and, although extremely talented, opted to follow pragmatic careers based on their often uncertain past. This is the moment Jacquelyn decided she needed to do something that mattered, for her sake, but also the memory of her friend.

She went on to have a career in the music industry, which was incredibly fulfilling, but also frustrating. Jacquelyn explains the happiness that stemmed from years of helping new artists be discovered, making mixes and having a great relationship with the best boss sheâ€™s ever had. The difficulty came when she realized the career was not as romantic as it seemed economically, but also, and most importantly because of corrupt decisions being made all around her. 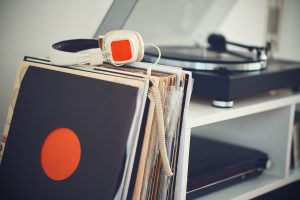 Enter the change to a career in design and finding a new way for music to make her happy: becoming an audiophile.

When asked, â€˜Who makes you happy?â€™ the answer is her grandmother (They are exactly 50 years apart!) However, more than happiness, Jacquelyn says her grandmother brings her feelings of positivity and comfort. With her, she always had and continues to have a home. From making Jacquelyn meals in the microwave to using a mobile-dishwasher as a filing cabinet, sheâ€™s adorable, giving, and strong despite all the difficulties sheâ€™s experienced. Without a doubt, Jacquelyn tells us her grandmother is her role model.

Looking to find her some time throughout the next few years? Sheâ€™ll be at Carnegie Mellon doing doctoral research on the relationship between design and happiness.

The How of Happiness, Sonja Lyubomirsky

From Jacquelyn: Website, Twitter, LinkedIn, 500px, Medium. Jacquelyn assembled a playlist of songs that make her happy; you can get it through Apple Music or Spotify.